How to Create Manual Saves?

The game use an autosave function, without manual saves. Sometimes, it is good to have a manual save, so you don’t need to replay first

5-6 days, or you don’t want to replay to the 18-22th day for every single character full story unlocks, as sometimes building up reputations, and so unlock full story achievement of each character not possible. I actually finished my first walkthrough without earning any of the complete character story achievements. That time I still not figured out the requirements.

Username is different for everyone, based on what name you added to user when installing windows.

The save file in that folder is the save for the game. It is overwritten every time you start a new day, so just copy the file and if you want to revert to that day, then you can just delete new one and copy back your old save.

9 Unique characters, 1 achievement for each. Unlocked, when you fully discover their background.

When you check the My Story tab of a character you will see 3 diamond-shaped objects there: 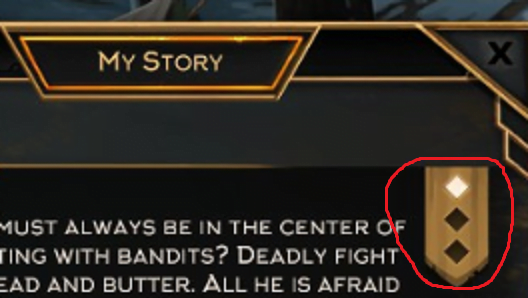 Once all 3 filled with white-yellow color, then the story of the character is fully unlocked.

How to get info about the characters?

During the night phase of the game, you always have an option to start 0, 1, or 2 discussion topics. If it counts to the background story of a character, then one diamond fills up.

How to get all info?

Getting the first 2 is quite easy. The third one is challenging as it has some requirements. The character needs to view every other character as a friend:

To do that the character needs to have the friendship bar of all other characters on the Relationship Tab on 50 at least.

Let’s check now the 9 characters and the 3 discussion topics which fill up diamond bars. 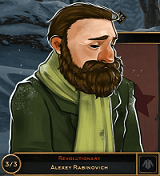 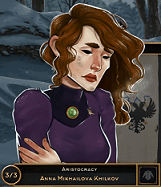 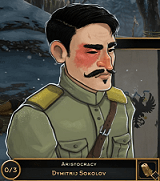 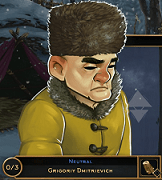 No One is Born an Orphan 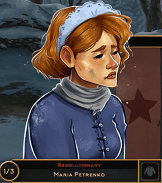 3.No one is born an orphan 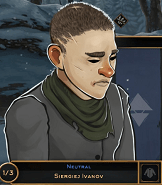 2.Demons from the past 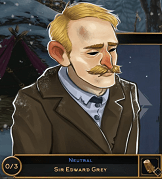 3.On his Majesty secret service

A Man of Letters 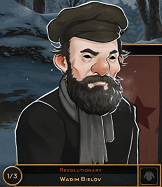 2.Jack of all trades

3.A man of letters 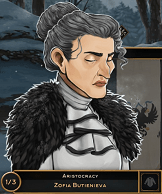 Alone In The Camp

The description of the achievement isn’t 100% correct. During the night phase of the game, there should be only 1! conscious character at the camp. There could be 4 characters total alive in the camp, but 3 need to be unconscious.

Quite easy achievements, as you can let characters die, you could make them lost during expeditions which making them spend the night outside.

A Soul in Need

Save another train crash survivor.

It could be called a storyline achievement, but still missable. After day 12-13, when on expedition you will get an event, which tells you about another camp. This matter will be discussed during the night phase of the game and will give you a quest.

Next, you need to send an expedition to the marked areas, at one of it an event will happen, with multiple choices.

To get a 5th survivor, make sure:

Please keep in mind the new survivor will be bleeding, unconscious, and might have other problems you need to solve asap.

Build everything in your campsite.

It sounds like an easy achievement, but it is not. You need to keep getting food, water, materials. Your characters will be tired. You need to repair the buildings. You need to unsnow them as weather covered them with snow. All these will eat up your action points.

And “everything” means really everything, you need to build up all the 5 buildings and upgrade all 5 upgrades on them.

You could save materials if you build some upgrades on makeshift version and on the last 1-2 days you can focus on finishing the last upgrades instead of cooking, etc.

Hard on Passenger difficulty, nearly impossible on any other.

You need to craft a fishing rod of harpoons at your workshop. Once you have any, add the item to the inventory of your character when starting and expedition.

Now move to the northern part of the map, to the river and by moving to the area or searching there, a fishing event may happen. Select the option which includes using the rod or the harpoon and you will get some fishes and this achievement.

Enter a cave and explore its dark corridors.

The cave can be found at this location: 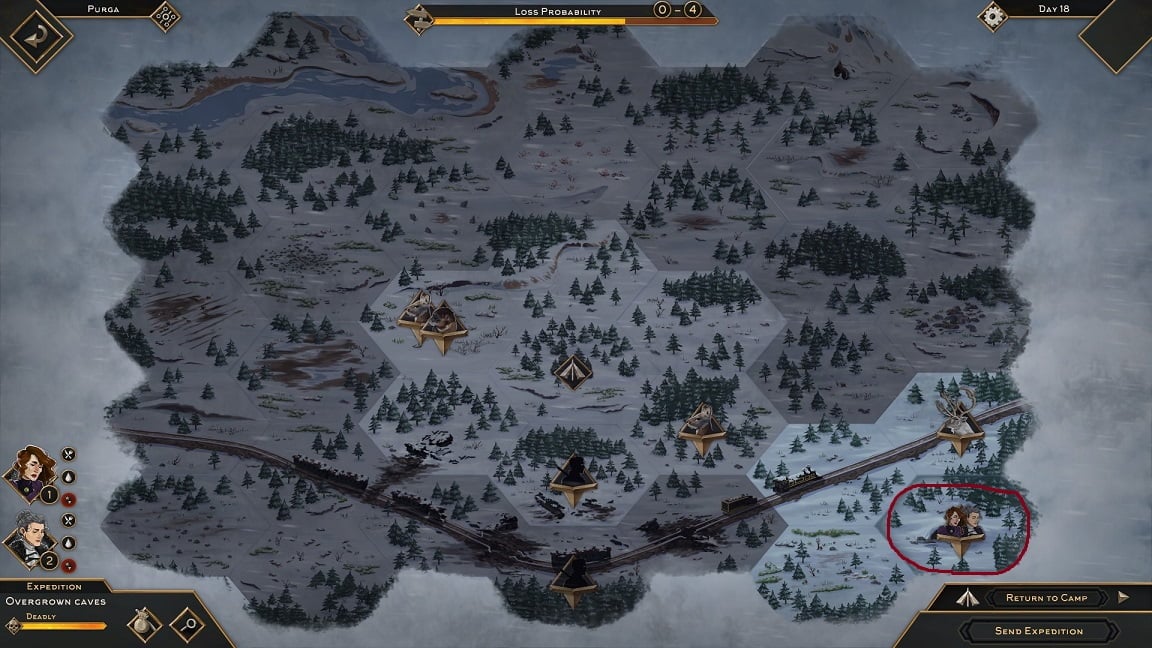 When moving to there, or searching there, you will have a CHANCE to find a cave. If I remember right if you don’t have the required items on you when the event happens, then you get a quest for exploring the cave.

So now if you start an expedition add a rope and a spade to the inventory of the expedition. You can craft the required items at your workshop. Move there, select the option of exploring the cave during the event.

To hunt down a moose you will need a rifle and ammunition. You can get both during a Spotted event, so check that for that achievement. However, the rifle need to be repaired, which is doable at your workshop.

The moose usually shows up on your map between 14-22days. Send out an expedition, add the rifle, and ammunition to the inventory. Once found the moose go to its location, then an event will show up:

1. Make sure you select the option first which suggests you to get closer to the animal.
2. Then use the option, which available because of your rifle.

The chance for success is not 100%, it is actually quite low. If the moose was just damaged, then it will move to a neighboring area so you can try again, if your expedition still has action points.

Locate a package hidden by the woodcutters.

During the first few night phases, select a topic for discussion about the woodcutters. This will give you a quest about exploring the railway tracks for a sign of them.

Once there, an even will pop: 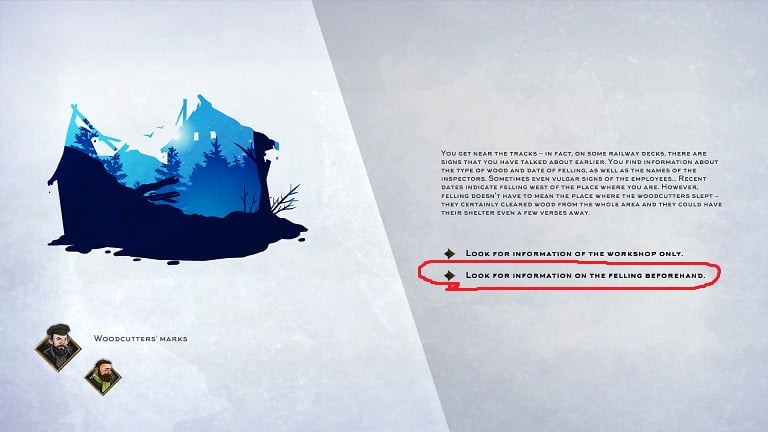 Unlocks a new quest, so move to: 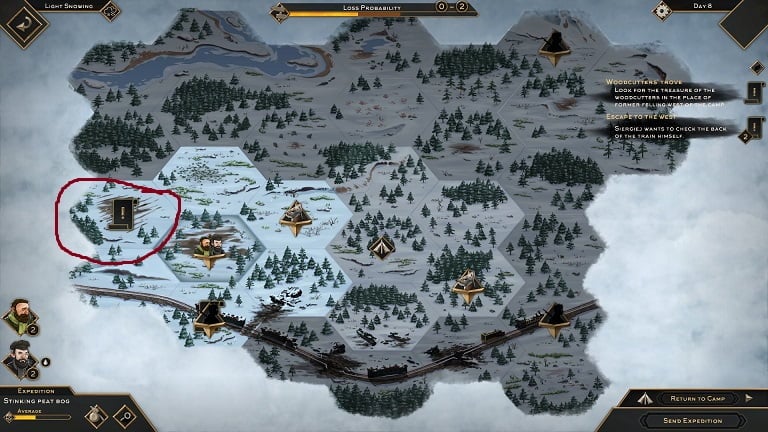 There will be a new event. If you have a spade on your expedition then another option possible, else select: 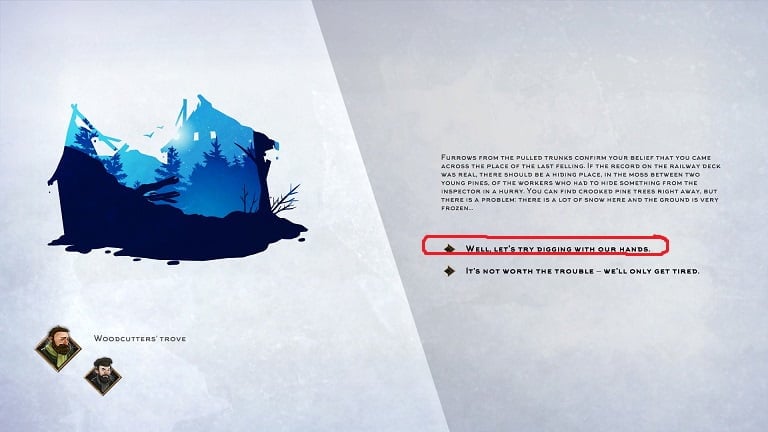 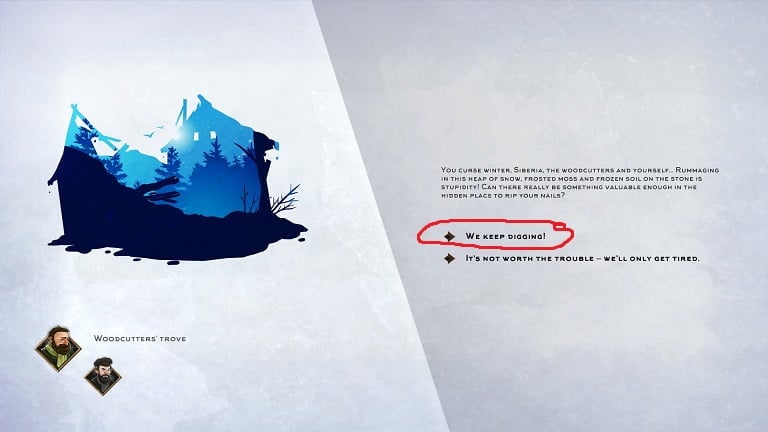 If your camp has too huge visibility, the first time a scout checking your camp (or fix event around day10-12). This event unlocks the Spotted achievement.

Now you have many options to choose from in that event. Make sure someone will run after the scout. It is not important which character you select, with one exception. Don’t use any character with amputated legs. This unlocks Payback time achievements.

Please be aware the character you select will take a serious wound so he/she not to be patched up next round at the quarantine post building. Running after the scout also awards a broken rifle, ammunition, and 1 piece of warm cloth.

Amputate a feet and a hand of one of the characters.

It looks complicated but it is a very easy achievement. On day20 there is a fix “Timber” event. (Unless all your character lost during expeditions on the previous day.
During that event, one random character will lose its feet. He/she will also have a necrotic hand, which can be amputated at the quarantine post building.

There Was a Cat That Really Was Gone and Torn Yurt

There was a cat that really was gone

The tutorial will say you that the best idea for expeditions is when you send them out with 2 characters. If you do that you will never earn these achievements.

Make one of your characters hallucinating, by consuming hallucinogenic mushrooms. Then send out that character as an expedition. One of these events will show up. Repeat for the second event.

Now, these are very tricky. You need to be done these before Purga starts on day 15, after that the last stage of this event chain can’t occur. I don’t suggest trying it on harder difficulties.

You need to send out expeditions with a single character. These expeditions need to be lost, so they need to run out of action points, so keep moving and searching. Every time an expedition lost there is some kind of events, first, you need to get this one: 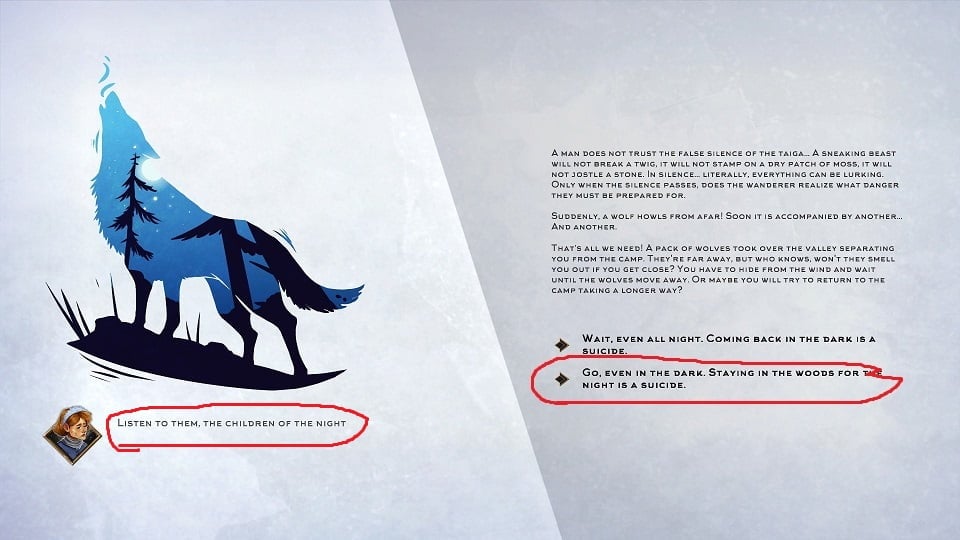 Select the marked decision. Now you need to keep sending out expeditions. Again, just like before, do it with only one character. The expeditions need to be lost again, and as usual, you get one event at that time. Sooner or later that event will be this one: 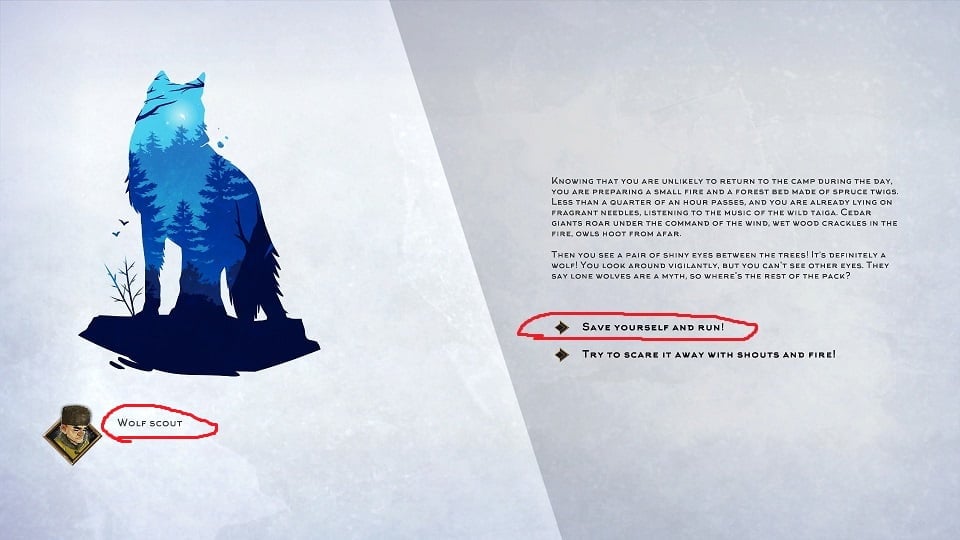 Select the marked decision. This will unlock Cry Wolf achievement… Next step: Make sure you have some weapons. Knifes enough, torches eventually. Make sure you have a built palisade building with at least one upgrade. Make sure your characters have decent health points. Once all done, send out an expedition with a single character, and make him/her run out of action points and so making the expedition lost. Now, this event should happen: 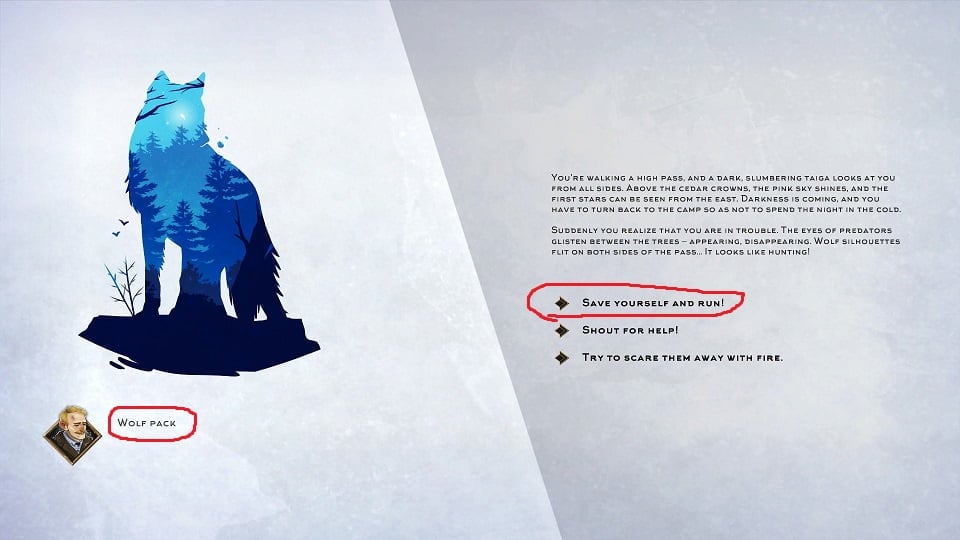 Select the marked decision and finish the day. If all done right, and Purga still not started, you should get the following event before or after the night phase: 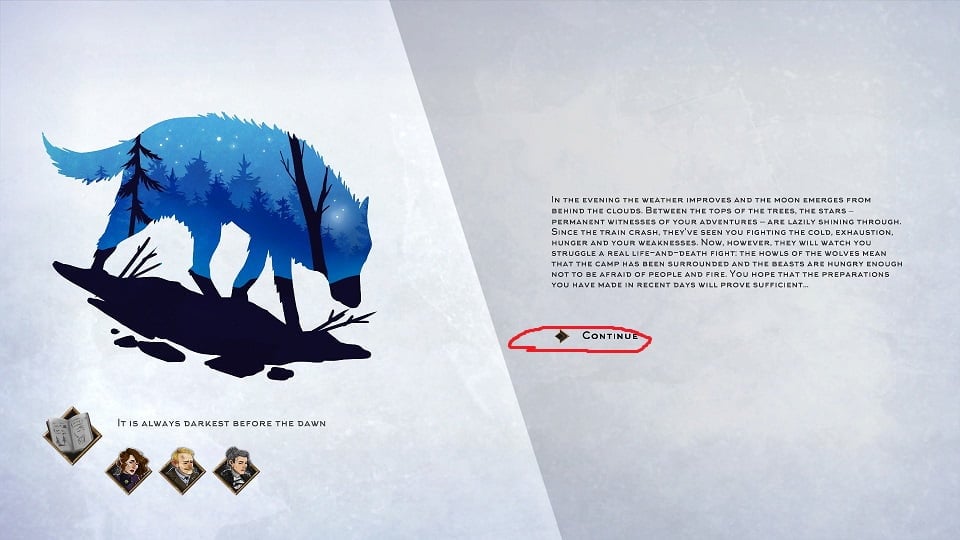 Just keep clicking the continue, and if you done all that I said, got weapons, palisade+upgrade, decent health points then at least one of the characters will survive the event and you will get the Wolfpack achievement.

No Man Left Behind and Help did come!

Survive until the 25th day and make sure you finish one of the quest (or both? tried only by finishing both) available during day 23-24.

No man left behind

Self-explanatory. Challenging, but doable easily on the Passenger difficulty.